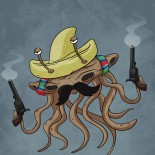 I don’t want to spoil the trailer too much… go ahead and watch it!

As you saw, the trailer focuses on a mind flayer aboard a flying vessel known as a nautiloid. The nautiloid is a Spelljammer vessel, and that has a lot of fans excited, again, about a possible Spelljammer campaign setting.

Update: Here is Chris Perkins, speaking about Nautiloids on the Lore You Should Know segment of Dragon Talk, with Greg Tito:

When could it release? What might a Spelljammer setting look like these days? Which old elements should be brought into 5E, and which should be left behind? What might an adventure look like? Let’s take a quick and dreamy look!

That scene in the trailer is the perfect answer. Riding red dragons to attack a mind flayer ship? Taking a bite out of the hull to have the dragon breathe inside? Awesome!

As @jason_wilson said on Twitter, “I remember one encounter I ran in which a Neogi’s umber hulk slaves smashed through a Spelljammer’s hull to get at the party.” YES! That’s the stuff of Spelljammer!

Spelljammer games were full of awesome 3-D swashbuckling. Boarding parties, siege weapons, all kinds of cool stuff. Plus, crazy species and worlds! A Spelljammer crew could look like a Star Wars cantina, and the foes just as varied and interesting.

The ability to visit different worlds meant a DM could keep the game supremely interesting. Think of Star Trek. Each episode could take the heroes to a new and wondrous world… which can be populated by absolutely anything on a DM’s shelf. Take the trickster gods in Tomb of Annihilation and give them each a world rotating around a star. Create a world of metal with warforged inhabitants using your Eberron rules. Take your favorite Undermountain level and make it a planet. The opportunities are endless, allowing to mine all the products you already own.

Ships are an excellent and fun gold sink, allowing characters to do things with gold. Spelljammers can be tricked out with all kinds of cool features. Just like an Acquisitions Inc franchise, a Spelljammer can come with you, allowing you to detail an awesome base and take it along on adventures. Nerdarchy has a great take on why Spelljammer is awesome.

Spelljammer, like Dark Sun and Planescape, is a strange setting. It’s full of wacky concepts that are great for shaking fans out of normalcy. When you have run a few straightforward campaigns, you start to want something a bit different. That’s where a campaign like Spelljammer really shines.

5E has been out since August, 2014. While the official adventures have had some neat twists, they haven’t been that gonzo. This year or the next could be perfect for a campaign like Spelljammer, Planescape, or Dark Sun. It could even be reasonable to see these campaigns released every other year, with more normal adventures/settings in between. Normalcy followed by spice.

Maybe the trailer is a small hint that we could see something this year, but I suspect next year is more likely for one of these settings. Of course, there is no assurance WotC will ever give us Spelljammer. The biggest impediment really is for WotC to have the right vision for the product so it isn’t a niche that appeals just to older players. The Baldur’s Gate trailer goes a long way to achieving that!

“Spelljammer: confirmed!” has become an old joke on official streams. It seems closer than ever to being true.

In “Why Dark Sun Was 4E’s Most Successful Setting, Part 2,” I talked about how Dark Sun was well supported through just two official books… because a number of supplements and adventures were provided through online magazines and organized play. This allowed just two main products to provide a deep experience. A similar approach could work for Spelljammer.

AD&D’s Spelljammer had way too many products. Three boxed sets! More than 20 adventures and supplements! A video game! Multiple novels! We won’t see that again.

5E’s Spelljammer would likely see a hardback adventure that also includes rules. It could perhaps be accompanied by a separate auxiliary book, the way 4E’s Dark Sun had a campaign guide and a monster book. I could see an adventure and a sourcebook, but the sourcebook would have to be compelling. More like a Xanathar’s Guide, useful to any campaign but also helping a Spelljammer campaign be more complete. For example, a sourcebook on vehicles and mass combat, with rules useful for any campaign.

The adventure would likely have a strong central plot around a main threat, while taking characters on a tour of different fantastic locations. The old Spelljammer adventure, Under the Dark Fist, is a good model of that, with a slow reveal that becomes a fun major adventure.

A great question is how to address ships. The old boxed sets contained really cool cards for each type of Spelljammer, providing art and deck plans. Star maps and even fold-up paper ship minis rounded out the experience. Ships mattered because the setting provided rules for ship-to-ship combat. The rules weren’t great, but they were still very fun.

However, we have seen digital releases for adventures, such as free handout files and digital maps through Dragon+ or on the adventure’s product page. And WizKids has made a large galleon loosely tied to Saltmarsh and a smaller airship directly tied to Eberron. WotC created miniatures for ships back when they made minis for the Star Wars SAGA RPG. It could happen, even without a boxed set.

The recent Eberron Oracle of War campaign has been amazing. It solidly demonstrates how a relatively short arc of adventures can bolster a setting. The lore is expanded, DMs get an easily accessible set of adventures, and conventions and stores get exciting content. A Spelljammer arc of organized play adventures and events would be amazing! Can you imagine a huge ship battle across tables? That would be EPIC!

Spelljammer was written in 1989. The rules are fairly dated. Let’s look at the elements 5E has to address.

D&D took some early real-world celestial concepts and ran with them, so as to allow the different campaign worlds to remain connected but separate. The planets in a given campaign setting were encased in a crystal sphere. Its outer shell had stars inscribed and even moving upon it, explaining why we saw stars. All of Oerth’s planets and moons were in one crystal sphere, while all of Krynn’s planets and other bodies were in a different crystal sphere. Realmspace, Krynnspace, etc.

The crystal spheres sort of float within a rainbow-colored phlogiston. Special means could allow a spelljamming vessel to pass through a crystal sphere’s shell, so it could navigate rivers in the phlogiston to reach another sphere.

Back in AD&D, each material plane (such as Oerth, or the Realms) was separate from the others. You needed planar travel to access them. The rules in Spelljammer were sufficient to still keep the worlds fairly separate, both for the logic of the campaign worlds (keeping them distinct and separate) and the sanity of DMs.

5E is a bit different. It allows even teleportation to take someone from one material plane to another. This could make it worth revisiting how Spelljammer vessels work. It could be worth removing the crystal sphere concept, or even ignoring it altogether. I am inclined to prefer ignoring it. Simply don’t talk about crystal spheres or the phlogiston, and let DMs bring in those elements if desired. Focus on flying through the void in a given setting, and talk about how to get to other settings in a new way. This takes us to the helm.

Spelljammers are ships, and in AD&D they have a helm. The helm is almost always a powerful magic item (often throne-like) upon which a caster sits (there is also a version like a crown). Upon sitting on the helm, the caster lost all spell use until they rested, and they gave the vessel a speed based on their caster level and the power of the helm. This whole system was dissatisfying.

(In case you are wondering, Spelljammers generate a bubble of air and a gravity plane – typically aligned with the main deck of the ship. Look, it can take a while to warm up to these concepts. I promise it was a ton of fun! I’m totally not going to talk about any vessels powered by giant space hamsters. Oops!)

Spelljammer hasn’t really come back since those days. Many adventures have made mention of Spelljammers, but without actual rules. We see plenty of talk in Waterdeep: Dungeon of the Mad Mage, including a portal to an asteroid!

4E books, such as The Plane Above: Secrets of the Astral Sea, have limited rules. Ships such as an astral clipper require a pilot to stand at the helm and a crew to help, but that’s it. In the astral sea, any travel takes a random number of days. The very last page of 4E’s Manual of the Planes provides a Spelljammer vehicle stat block, and again simply says the pilot must sit at a spelljammer helm. It functions like any other ship, though it does say “This vehicle is equipped with a spelljamming helm, which is the navigation focus for the Plane Shift ritual.” Page 20 of the same book doesn’t add much more, saying the helm permits plane shifting. This is similar to the Planar Dromond, a vessel that has a runekeel allowing magical transportation from one sea to another sea on another world or plane.

I think that’s a far better model for 5E. There could be variant helms requiring empowering with magic or maybe even variant rules to boost a Spelljammer with magic (imagine the equivalent of juicing a vehicle with nitrous oxide). The core helm works better as a planar device.

Indeed, in the Baldur’s Gate III trailer we see the Spelljammer nautiloid basically use planar travel. (To activate it, the mind flayer captain pretty much uses the concepts for bonding with a mount from the movie Avatar! Ha-ha!)

Making Spelljammer travel a form of planar travel is far easier to deal with. There is probably some limit (perhaps dealing with the accuracy limits of teleportation and similar spells), which means ships still have to travel at normal flying speed to explore asteroids or fly around a planet. You can travel across worlds but still have a reason to explore. And your caster keeps their spell slots!

One of the coolest parts of Spelljammer was the idea of your ship meeting and fighting another ship in space. Spelljammers have siege weapons and defenses. You might ram a vessel, fire ballistae, or move in quickly and board for crew-to-crew combat. The rules need updating, but the core concepts are worth preserving.

I wonder if WotC couldn’t work with WizKids or another partner to create a separate ship-to-ship skirmish game that can stand on its own, but also be used in the RPG. If you saw the Attack Wing game, it could be the foundation of this. Attack Wing let you use creatures like dragons, swooping around and using attacks against each other. A fast version of that game could be awesome on its own, and be a vibrant part of the D&D rules as well. And, I mean… cool Spelljammer miniatures!! Take my money!!

If I were WotC, I would also want to look at streaming and convention play. Ship-to-ship battles could be really exciting for both types of play. Visually engaging, with big stakes and fun outcomes.

What Do You Think?

Do you think Spelljammer will be released in the next two years? What would you change about the old AD&D rules? How excited are you for an all-Giff boarding party? Let us know in the comments.

This entry was posted on February 28, 2020 by Alphastream and tagged 4E, 5E, Setting, Spelljammer.